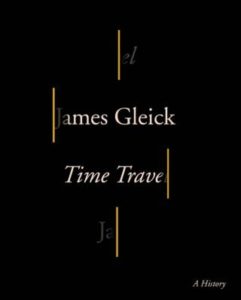 Here’s an interesting new book on Time Travel in literature by James Gleick, a published author of a number of best-selling science and technology books. His books have been translated into more than twenty-five languages.

His latest book traces the history of time travel through literature, a brilliant concept, through H. G. Well’s The Time Machine (of course), through Ray Bradbury, Woody Allen, and William Gibson. Although he does not mention Wherever You Go, There You Are, it looks to be fascinating. We hope to provide a review in the near future.

Here is the New Yorker review:

Time Travel, by James Gleick (Pantheon). H. G. Wells’s 1895 novella “The Time Machine” begat a new genre. Just four years later, Mark Twain beaned a protagonist over the head with a crowbar, sending him reeling into the Middle Ages, and since then storytellers from Ray Bradbury to Woody Allen have made liberal use of the device, introducing the public to wormholes, backward-running clocks, and so on. In this sweeping survey, Gleick tracks the idea’s passage through literature and film, making stops in ancient philosophy, theoretical physics, and neuroscience. Is fourth-dimensional tourism conceivable? Gleick suggests that our best hope lies in our own creative capacities. “Imaginations liberate us,” he writes. “Narrative itself is the time machine.”