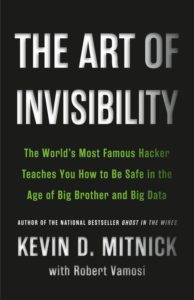 We just saw this review in Wired, of Kevin Mitnick’s new book, The Art of Invisibility – The Worlds’ Most Famous Hacker Teaches You How to be Safe in the Age of Big Brother and Big Data. Here’s a link: https://www.wired.com/2017/02/famed-hacker-kevin-mitnick-shows-go-invisible-online/

Mitnick, was one of the first computer hackers to gain big-time notoriety (or infamy – depending on your leanings) and was used partially as a model for the Gnome character in Glass House 51.

He was brilliant and at an early age learned the inner workings of computers and the Internet, and by the age of 19 he had hacked into DEC’s network and copied their software, a crime he was charged with and convicted of in 1988. Following some other hacking episodes, Mitnick was arrested by the FBI on February 15, 1995 and charged with wire fraud, computer fraud and illegally intercepting a wire communication.  Eventually he spent 5 years in prison.

It was said that the government came down especially hard on Mitnick, in its efforts to set an example to hackers in the brave new world of computer crime. Compared to modern hackers, who are often thieves, Mitnick just enjoyed his ability to sneak into the networks of large institutions, and never stole anything valuable (like credit cards) for financial gain.

We will be definitely getting and reading this as trying to keep a semblance of personal privacy in modern times is becoming harder and harder.

You should know that some of your email providers scan the content of all your messages (Google, for example, takes the content of a user’s gmail combined with data from their Google profile as a whole, including search results, map requests and YouTube views, to display what it considers are relevant ads.)

This is all supposedly known to us in the fine-print user agreement we hurriedly click to Accept.  And then we’re monitored forever.  Which, though somewhat unsettling, might not all be all that bad in a totally free, benevolent society, but the equation could soon change if an autocrat or plutocrat could come to power in America – or anywhere – and begin to seize our personal information that has long ago lost its privacy.  Again, this is what Glass House 51 is all about.

Mitnick, in his new book, apparently is providing some ways out of this.  We would think that survivalists and preppers would be interested in his suggestions. But from the Wired review blurb, it appears this is not simple.  We will provide an update on the book in a future review.

Below is a pic of Mitnick (center) with friends.