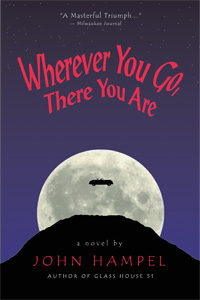 “It’s pure magic! It’s Harry Potter for adults!” is how one of our favorite booksellers described John Hampel’s magical and transcendent debut novel, Wherever You Go, There You Are. Another pegs it as “Wonderfully entertaining . . . Impossible to describe.”

Well, it’s not exactly easy to describe . . . but then there is so much here! This is a book that takes readers on a magical journey from the west coast to the Midwest, and back again. With loads of fun, magic and mystery every step of the way!

Where else can one meet the president-to-be of the United States on a suspiciously smoking hilltop in California, witness the resurrection of James Dean, and grab a ringside seat for the clash between the ultimate mechanics of science and the sacred, (supposedly) passive, exploited earth? It’s all here in this very strange and wonderful tale of the great Midwest!

We begin our journey at the height of the 70’s when the chief engineer of an electronics firm in Los Angeles has suddenly vanished and rookie private investigator Basil Lexington has been hired to find him.

Basil’s search takes him from southern California, where he was:

to the great American Midwest

“. . . an awesome clarity of angry sky and uncountable acres of wide open land, infinite untrammeled space with not even token hills in the distance, not a one, farm-clusters appearing like isolate islands in wet black seas stretching horizonward, the topsoil rich and dangerous, so deep here he can sink to his thighs in it . . .”

. . . ultimately to Mystery Rock Hill, nexus of the Wasson clan and plexus of the brooding earth, where he finds the girl who stops him cold, the car of his dreams, and the meaning of it all.